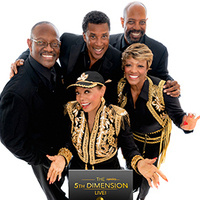 "[The 5th Dimensions’] voices and harmony are stronger, more emotional and as meaningful, perhaps more meaningful than when they first became hits…” – White Plains Citizens

In 1967, a little-known vocal group called The 5th Dimension recorded the song “Up, Up and Away” which catapulted the group to instant stardom. Countless magazine covers, world tours and several Grammys later, The 5th Dimension is recognized as one of the most prolific soul, R&B groups in musical history. Remaining true to their original, five-part harmonic sound, The 5th Dimension, with original member Florence LaRue, continues to deliver dynamic performances, and has secured its position in the Grammy Hall of Fame, with 14 gold records, six platinum records and six Grammy Awards.